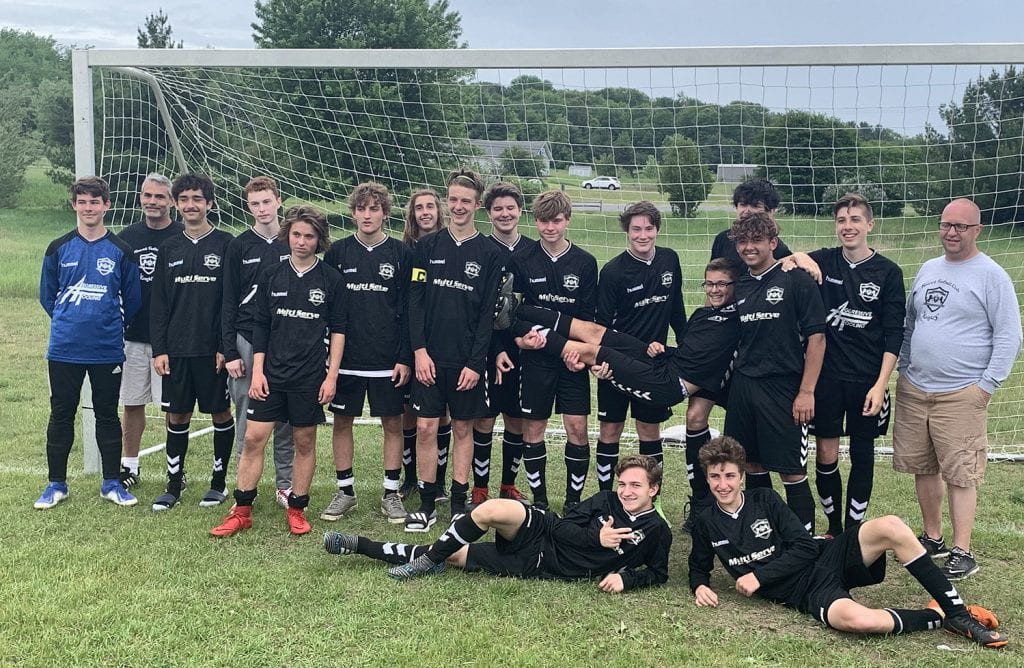 The Fenwick Football Club Knights under-18 boys team is hoping to participate in the Gothia Cup in Sweden in July 2020. The team saw success this past spring when it won the Grand Valley Soccer Association division title. The team is currently holding a scrap metal fundraiser to help cut down the costs of the trip. — DN file photo

FENWICK — The Fenwick Football Club (FFC) Knights, a club soccer team based in Montcalm County, recently received an invitation to play in the Gothia Cup in Sweden in July 2020.

The Gothia Cup is often referred to as the World Cup of youth club soccer. The tournament started in 1975 with 275 teams from five countries and has run every year since now expanding to around 1,700 teams annually from more than 70 countries around the world.

The Knights received the opportunity via a partnership with a club team in Europe. Due to the recent success of the Knights, including the under-18 team winning a Grand Valley Soccer Association division title in the spring, the opportunity to participate in the Gothia Cup became a reality, according to FFC Knights Director of Coaching Ray Case.

“Forging that relationship, we met people who said, ‘We’ve got this opportunity in Sweden. Your team did well, why don’t you send them over to Sweden?’” Case said. “We got the invitation, it’s not a closed tournament but it wasn’t on our radar at all.”

With the great opportunity came a great financial cost, however. The team is looking to fundraise enough money to get 16 players and seven adults to Sweden for 12 days, 10 of which are tournament days and the first and last being travel days. Case is setting the estimated cost of each player at about $4,000.

“For airfare, room and board and all your meals for 12 days in Sweden, that’s really not that much money,” Case said. “But it is a lot of money, this isn’t one of the wealthiest counties in the state so we definitely need all the help we can get.”

Case is seeking individual and corporate sponsors to help fundraise for the tournament. He expressed interest in partnering with a company with an international presence as the primary sponsor as the team could put its company logo on the Gothia Cup jerseys. He knows it’ll take a big, collective effort to help fundraise the money they are seeking, which he estimates at $93,600 total, but it’s important to him due to an experience he had earlier in his soccer career when he lived in Norway.

Held annually every year since 1975, the Gothia Cup is often referred to as the World Cup of youth club soccer. The international tournament regularly brings in about 1,700 teams from across the world and teams from 149 different countries have participated in the tournament since its inception. — Submitted photo

“That’s when I really saw soccer for the first time played well and saw the passion people had for it and it completely changed the way I looked at and played the game,” Case said. “It just opened my eyes to a whole new world that we don’t get to see here. Some of these guys want to play in college and I want them to have that new understanding of the game, I want them to see it at a different speed, I want them to see it played with a different level of passion. All of the things that really affected me and changed my relationship to the game is what I want to offer the players.

“They’re not going to see this level of soccer in the United States, not at this level of development in this country,” he continued. “That’s what happened to me, I went there and I saw it played in a way that completely blew my mind. It opened my mind to the possibility of playing at a higher level — a level that I didn’t really know even existed. You can watch it on TV but it’s different when you’re there.”

The tournament is seeded based on age and skill level. The Knights will play some exhibition games while they are in Sweden and are guaranteed four tournament games, with the possibility of more if they advance. However, it’s not about winning or losing, according to Case, it’s about providing the kids of the FFC with an opportunity for this year and years to come.

Part of Case’s job while over there, he said, will be networking, meeting people and making it possible for other kids in this community to have this kind of opportunity next year and the year after.

“People whose kids are in soccer, maybe even the ones who are in our club, who are U-12 right now, whatever they do today is going to be the investment in their kids four to five years from now,” he said. “We need to succeed with this, we need it to do well because we want to give this kind of advantage to every other kid that comes through our program, it’s not just about this year.”

The team is trying to cut down on the price per player as much as possible, including looking for cheaper airfare to Sweden by flying out of other airports. Case said he’s seeking people with access to busses to open the possibility of traveling farther and flying out of an airport with a cheaper flight.

The team is currently holding a scrap metal drive to raise funds. People interested in donating their scrap metal can participate in one of three ways, including scheduling a pickup. There are two drop-off locations — 9163 Tessie Court in Fenwick or 6396 Ostrum Road in Belding.

Donations can also be made by dropping off the scrap metal at a recycling center such as Greenville Steel Sales or Fair Salvage in Sheridan and donating the proceeds to the Fenwick Football Club. All monetary donations can be mailed to 9163 Tessie Court, Fenwick, Michigan 48834.

Case anticipates more fundraisers will be created in the coming months to help cover the costs. He is open to all possibilities of fundraising, as the players have already put down a small deposit and will be receiving monthly bills until about June.

“Honestly, if there was a place close enough, I would be giving plasma every week,” Case said. “I’m to the point right now where I want to get these guys there and in order to make it really feasible, we need to bring that $4,000 per person down to $1,000 per person. That’s kind of our target.”

The team has set up a GoFundMe crowdsourcing donation page for anyone interested in donating directly to the fundraiser, which can be found at gofundme.com/f/gothia-cup-in-gothenburg-sweden.

More information on the FFC Knights and future fundraising opportunities can be found on the Fenwick Football Club Facebook page. To schedule a pickup for scrap metal, contact Ray Case at ffcknights@gmail.com or via phone at (616) 894-5550.