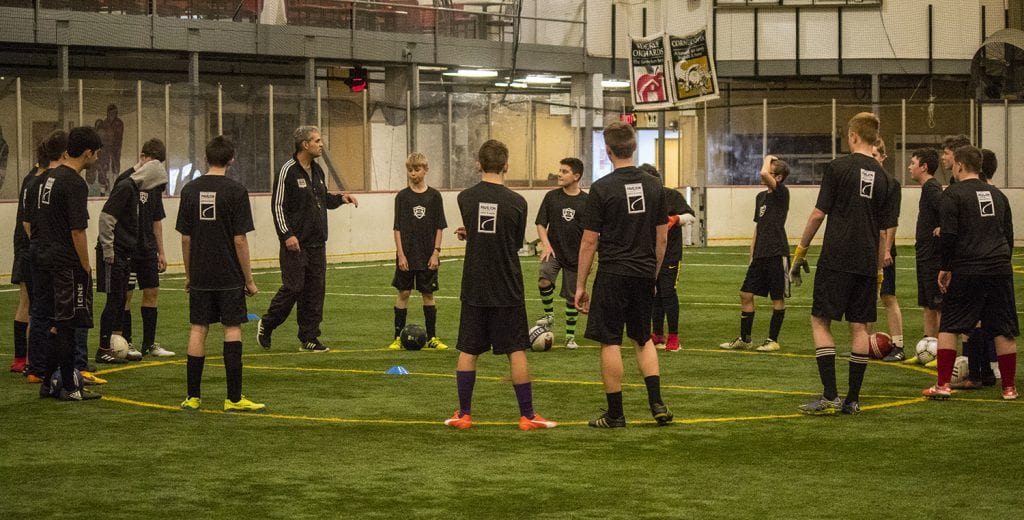 Fenwick Football Club coach Ray Case addresses his U-14 and U-16 teams at the start of their practice at Klackle’s Pavilion in Greenville. Case, a licensed soccer coach, formed the Fenwick Football Club to serve the kids of Montcalm and Ionia counties with an outlet for competitive soccer. — Daily News/Alex Freeman

FENWICK — Competitive youth soccer has been lacking for some time in Montcalm County, but licensed soccer coach Ray Case believes he is on the road to solving that problem with the newly formed Fenwick Football Club.

The Fenwick Football Club (FFC) is a youth club which allows kids who are ready to progress in competitive soccer to take the next step.

Prior to the formation of the club, many kids from the area were forced to go to Rockford or Grand Rapids if they wanted to compete with a club level team. Not only was the travel expensive, so were the membership fees.

Case, a soccer dad, knows the strain and costs associated with playing competitive soccer outside of one’s community, as his son, Harrison, plays for Midwest United based in Grand Rapids.

Seeing the need for a club soccer team in the area, Case formed the Fenwick Football Club, who will start their inaugural season in just a few short weeks.

While there was soccer previously in Montcalm County, it was all classified under the American Youth Soccer Organization (AYSO). The United States Soccer Federation classifies AYSO soccer as recreational, meaning all players on the team must play. At the club level, tryouts are held and the atmosphere is much more competitive in nature.

“We need rec programs, it’s very important,” Case said. “But the kids around here, when they got ready to go further, they didn’t have anywhere to go. So they would have to go to SCOR (Soccer Club of Rockford) or Midwest United. They didn’t have any choice.”

A big hurdle for many parents sending their kids to soccer at the club level was the price point. After doing extensive research with soccer parents around the area, Case determined the right price point to start up the teams.

“This is Montcalm County, we don’t have a lot of money, it’s not a rich county,” Case said. “Our fee for a season is $220 and that includes your uniforms and we don’t charge you for any tournaments. So if we do go to tournaments, it’s not extra cost.”

The Fenwick Football Club has eight regular season games scheduled for this season, but Case hopes 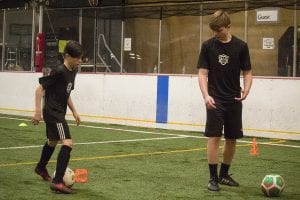 Twelve-year-old Chase Matulaitis, left, receives some tips from 15-year-old Ben Russel, right, on how to properly execute a Maradona spin during a recent Fenwick Football Club practice. Coach Ray Case said he loves to see the older kids helping the younger kids on the field.

to enter some local tournaments as well. In order to pay for the tournaments, Case relies on his local sponsors. While his sponsors have been great and have already provided support, Case said he always welcomes new businesses to support them and he strives for it to be mutually beneficial.

“What we do for them is we say ‘Look, we don’t expect you to get nothing, we’re going to actively and aggressively advertise for you,’” Case said. ‘“If you pay enough, you’re going to get on the front of our jerseys. If you pay a little less, that’s fine, we’re still going to make sure you’re still on our website, on our Facebook page and on our field banners that we’re going to have printed up. We’re going to tell everybody we can think of that these guys are helping us out, these guys are actually contributing to the youth and their community.’”

So far, Case has formed two teams under the FFC banner, a boys under-14 team and a boys under-16 team. He hopes to form a girls team in the future along with a premier team, which is one level above club soccer and would allow for further travel.

The teams are comprised almost entirely of kids from Montcalm and Ionia counties. Case said he feels good about the talent on the teams, especially the under-14 team, and expects them to perform well from the start.

“The most important goal is that we develop these teams to the point where next season in the fall, especially this U-14 team, they’re able to come in and compete for the State Cup,” Case said. 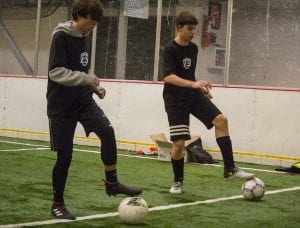 Fifteen-year-olds Brayden Spitler, left, and Harrison Case, right, execute the four-corners drill in sync with each other during their recent practice. All five of the regular practice drills at the Fenwick Football Club’s practice focus on ball control and coach Case makes sure that every player has a ball at their feet at all times.

The Michigan State Youth Soccer Association State Cup is essentially what a postseason tournament would be for a club level team such as the FFC. While Case said they don’t plan on participating in it this year for logistical reasons, he believes it is an attainable goal to compete for it in the near future.

“That’s a huge goal because they’re a select team, and in the state cup, it’s everybody, it’s an open tournament,” he said. “I think we have a U-14 team here that’s really good, way better than people know because they’ve been a team that should be in club that’s been stuck in rec.”

As they are a new club, expectations are still in the early stages of developments for the FFC and their upcoming season. One team member, Ben Russel, a freshman at Greenville High School, said he wants people to know the Fenwick Football Club name.

“Seriously, I want to make this club known,” Russel said. “I want to get us on the map and make us a danger. Personally, for fun, I want to get a bicycle kick (goal) in there. I’ve attempted it before but it never works. Maybe this year, right?”

Riley Morin, another Greenville freshman, has been playing soccer ever since he was 4 years old. In his many years playing AYSO soccer, he’s had many coaches, and he spoke admirably of coach Case and his expertise.

The techniques put into place by Case for practices are fairly new to the American soccer culture. Case, who spent part of his life in Europe, learned from their soccer practices and hopes to instill a new style of practice in for all of his teams which focuses heavily on ball handling.

“What we do is we run kind of a pro-style here where we don’t do conditioning without also having touches on the ball,” Case said. “So, we don’t just run mindlessly like a bunch of scared antelope, we actually have a purpose when we run. If you’re going to run, have the ball at your feet.”

Case sets up five stations at practice and breaks his kids into groups. All of the kids have a ball at their feet and run the drills as a group.

“We do this all for three minutes each,” he said. “As soon as I blow the whistle, you sprint from one 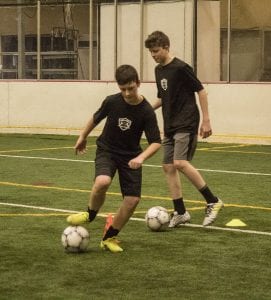 Twelve-year-old Logan Ruehs, front, works his way through the slalom course while being trailed by 14-year-old Jake Van Tassell, back, during the recent Fenwick Football Club practice.

The FFC Knights are members of the Grand Valley Soccer Association. They will play their home games at the Grand River Riverfront Park in Lowell, and will mostly be playing other club teams around the Grand Rapids area throughout the season.